June 10, 2011
I remember the first day my mom took me to the bank, it was back in the day - mid 90s and we lived in the country (euphemism for ushago). The only bank that was available was Post Bank. Now I can't remember too much about how it all used to work, but I remember this: once you opened an account you were given a small booklet, I think it was called a passbook. The booklet was a journal that contained a handwritten list of all the transactions made to your account. 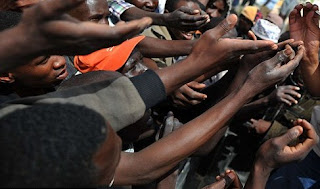 Now those were the days before things like branchless banking, local area networks,  desktop banking modules, computers, or even queues existed in Kenyan banks, less so a rural based bank like post bank. Instead to withdraw money over the counter the procedure was something like this: 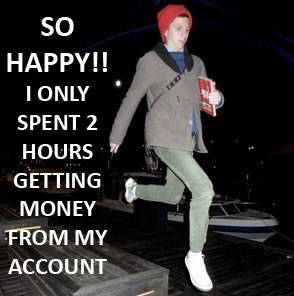 Well we live in different times now: from M-PESA integrated bank accounts to VISA electron cards that allow you to access your money across the globe to plush couches in banking halls where you are even served tea. The banking experience in Kenya has really changed for the better. One area where I feel we still fall short however is Internet Banking.
Now I would have liked to do a more comprehensive post where I could examine each bank's internet banking offering but I figured your input would be even more valuable. So I will only list the banks I have had a personal experience with. Feel free to add your own.

I opened an ABC Bank AfriNet Internet Banking account sometime in mid '07 and used it upto mid '09. Now things might have changed since then but ABC were pretty ahead of the curve in providing this service. Checking the balance, debits and credits was what I used the service most for although it was claimed that you could also transfer funds between your accounts. However this had to be followed up with a physical authorization letter (which kinda beats the whole point). Besides the Sh.495 flat  monthly fee I paid, there were no other costs to operating this service. Security is pretty sucky as you are never requested to change your password and the communications are not encrypted nor is the site certified.
2. Equity Bank
I don't really know if I should include this here because I can't remember really getting any service with this offering. I opened the account in 2009 but all I can remember viewing when logged in was a weird chart for calculating loans. Can't say much more.

This is more of a I-have-received-a-transfer-by-someone-who-was-using-the-service experience. This means two things: it works, and it allows you to do inter bank transfers. The service is called Straight2Bank.

First problem, from the time I applied to when I finally got login credentials was a lifetime and a half. About three months to be exact. I figure I could have walked to the bank and back to the office about seven trillion times while waiting for them to open my internet banking account. With that unpleasantness out of the way, I can say the service though basic is pretty ok. The security is tonnes better than that of ABC, they use some dutch software called Bweb which at least is certified and encrypted. You can only check balances, deposits and withdrawals although these are not necessarily real-time and it can take up to a whole working day for new transactions to appear.

5. Co-operative Bank
Now truth be told, everything you've read before was just a prelude so that I could gripe about the Internet Banking service from Co-operative Bank dubbed CoopNet. Now, first a disclaimer - I have not actually used the service - but, what I've experienced about it so far convinces me I should not even bother trying to. In my defence I did give Coop Bank the opportunity to explain the account to me but they did not see it fit to respond (via email off course - hey it's internet banking they should be able to respond to email)

My major gripe is with the pricing. I mean my Post Bank experience was a headache to me the customer - but it must also have been a headache to the bank. Removing customers from the bank lobby helps them focus more on better financial products, saves them air-conditioning costs, janitorial costs, printing of paper forms cost, queue management costs etc. You'd think the bank would be beating down the path to make Internet Banking accessible to all its clients, but noooooo, not Coopbank.

To access CoopNet through a corporate account you need to fork out an obscene Sh.1,500 per month. Yes, that is one five zero zero. Think that's it, hold up wait for this one.... for every transaction (assumption is debit, credit, transfer etc) you need to pay Sh. 30. I wanted to use this service mainly to confirm M-PESA paybill payments into my account. I can get three or four payments per day - some as low as KSh. 200. I don't have to do the math for you, suffice it to say it would ludicrous to use CoopNet for this!

Thank you very much Coopbank (not!), but if it's a choice, passbook please!

Cyber Cafe with an EDGE

February 17, 2007
Followed up from Laying the Groundwork for a rural cyber I've finally got around to writing this. Thanks for you all who patiently waited. Although I approached the project as an "internet consultant", I soon realised I would need to implement the whole spectrum of tasks required to get the cyber running. I spent almost a week laying the structured cabling, installing the software, and configuring the network. Most of the work I was doing for the first time (e.g. drilling holes in concrete to fix the trunking screws) and most of it was hard, but all of it was enjoyable. I needed to prove the project was implementable with minimal human resources (if it was going to work elsewhere). With an eye on both troubleshooting by the owner and future projects I prepared detailed How To manuals for most of the tasks. So the day finally arrived, November 17th I connected all the PCs to the internet. The results were incredible, the speeds were nearly as good as my 256K broadband
38 comments
Read more