July 14, 2010
Peer to peer sharing is the public enemy number one for anyone in the digital media industry. The ease at which someone can download movies, music, and software made significantly easier by high speed fibre-optic connections has eroded the earnings of producers and artists worldwide. I would love to say that I can throw the first stone, but sadly the lure of free stuff is too strong even for me. It is with this backdrop that I managed to watch a fairly good camera copy of the surprise early 2010 blockbuster Alice in Wonderland. I didn't expect too much, but once again Tim Burton pleasantly surprised me. Alice, based on Lewis Caroll's fabled children book has been updated for the modern audience and given extra pizazz by the always entertaining Johnny Depp as the Mad Hatter. Before this becomes a movie review, I'd just like to re-iterate one of Alice's quotes that deftly captures the topic of my post today: curiouser and curiouser.

This is how I describe some of the things I observe at my office building View Park Towers. Now, View Park Towers is a majestic looking building overlooking the John Gakuo revitalized central park, with its lush green lawns dotted with water fountains. Having been here nearly 5 years now, I can attest to the high-street atmosphere of the place and it is one of the selling points for our serviced offices at www.geniuscentre.com 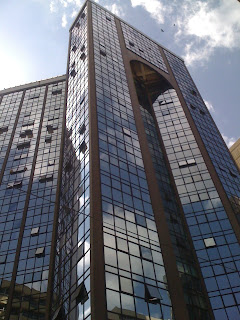 The imposing view park towers
However, events in the past year have befuddled me, and I wait every day with anticipation on what new oddity I'll observe. Here I go through the top 3 I've seen so far.

1. Scanning People Entering the Building
Security of buildings in Nairobi has never been the same since the '98 bomb blast. Metal detectors and body scanners now are commonplace for most buildings. Unfortunately (at least at View Park) it seems that while the equipment was purchased, no training was given to the security guards on how to use them. Makes me think that the security company might have just thrown scanning in the pot to sweeten its proposal and win the tender.

Case in point, first of all the guards at the entrance will only scan you when their supervisor is present, or they are not tired or hungry. And even when they do scan, it is a laughable pass over a random part of your body. Nothing, not even an alarming beep from the machine will give them reason to do any further search. It really does nothing to my confidence when I think that someone with a suicide vest could easily enter the building.

Secondly is how they search vehicles entering the basement parking. Not only do the guards 'sell' empty lots to day parkers thus comprimising the building security but they have openly admitted to me that they have no clue what they are looking for when they pass a mirror under the car's body. They only check the boot when they are in the mood, and a practical joke (one day I put a poster written THIS IS BOMB on a gas cylinder) went flat because they didn't even get it!.

This is not only curious but downright ridiculous. Despite having a very high occupancy (with KEMU students occupying three entire floors of 30,000 SQ FT with about 1 student per 25 SQ feet) and most of these coming past 5 pm, the management sees it fit to turn off the water. The argument goes that if they left the water on some tenants (have previously) will leave their taps on and flood the place! This to me doesn't fly, I'm more likely to attribute some sort of rationing on this dry-tap-after-4pm business.

3. Placing a Security Guard in the VIP lift

Started only a week ago, I was very surprised to find a seat in the VIP lift with a very bored security guard on it. At first I thought he was there to help people press the lift buttons; but the absurdity of this and the languidness of the guard convinced me otherwise. On inquiry, I found that his job was to provide... ahem ... security. It seems that recently a lady was robbed of money while in the lift . Now, I sympathise with the victim but surely there must be a better way to provide security. Not only does the guard take up valuable space, but the process of his normal bodily functions compounded by being cooped up in a 5'x5' lift make riding the lift less than savoury, if you know what I mean. Placing a CCTV camera in the lift would be much more effective in preventing and arresting any crimes in the lift, it's also cheaper in the long run, and the now freed security guard can be used to turn off any taps left running at night.

While going through some archive blogs I found this even more impressive snapshot of View Park, that I took from Central Park. Enjoy 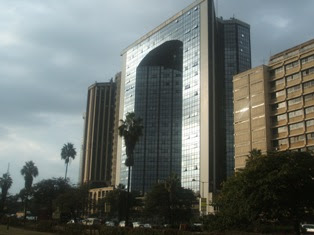 3CB said…
We have a Central Park?

Vishal Patel said…
CCTV Camera is the best security system for watch anywhere without go there, now days we can see every where cctv cameras are installed by Corporate Sector or by Government.
September 22, 2010 12:55 PM

Cyber Cafe with an EDGE

February 17, 2007
Followed up from Laying the Groundwork for a rural cyber I've finally got around to writing this. Thanks for you all who patiently waited. Although I approached the project as an "internet consultant", I soon realised I would need to implement the whole spectrum of tasks required to get the cyber running. I spent almost a week laying the structured cabling, installing the software, and configuring the network. Most of the work I was doing for the first time (e.g. drilling holes in concrete to fix the trunking screws) and most of it was hard, but all of it was enjoyable. I needed to prove the project was implementable with minimal human resources (if it was going to work elsewhere). With an eye on both troubleshooting by the owner and future projects I prepared detailed How To manuals for most of the tasks. So the day finally arrived, November 17th I connected all the PCs to the internet. The results were incredible, the speeds were nearly as good as my 256K broadband
38 comments
Read more