Internet, Charity, and Miraa - Day One

Back in July my good pal Eric Mibuari, an MIT alumni, invited me to help him set up internet access at a computer centre he founded in Laare, Meru. The idea was to use my internet in the village model which I had already deployed in two other places. I jumped at the idea, not only is Eric a fun guy, but I had never been to Meru and I needed a holiday from Forex trading. So together with another of my pals, Dru, we piled into a 4WD and headed off towards Meru.

Now, I have never been to Meru so I didn't really know what to expect. I borrowed the 4WD from a friend suspecting I'd be in trouble without it but I was pleasantly surprised to find well paved roads most of the way.

There was another reason I borrowed the 4WD, it was because it had enough storage room. The previous week Nakumatt (Kenya's leading retailer) had announced the opening of its Meru branch and I had my eye on a big-screen TV that was going to be on a special half price offer. I was sure of getting it as I would be in Meru on the day right after grand opening.

A rapid learning experience my trip was to prove, the first thing I realised was that Meru is a very wealthy town. If the fact that the TVs were all sold out on day one by 11:00 am did not convince me of this fact then it was the brand new Toyota Hilux pick-ups scattered everywhere making up 1 of every 3 cars. I was to learn in due course why this was the favoured vehicle.

Eric was already in Meru and asked us to rendezvous with him in Maua - a town 50km north of Meru and near the Meru National Park. We finally got to Meru at about 6pm and I discovered the second thing about Meru; at 1800M above sea level and off the slopes of Mount Kenya, the place is extremely cold. By luck Dru and I had both had packed heavy woolen sweaters, although the cold seemed to seep through those too. While waiting for Eric, who was coming from the centre, we took a tour of Maua. To our surprise we found that half the town's occupants were of Somali origin. Now for a non-Kenyan to understand this you must appreciate that rural areas are usually homogenous in ethnic makeup. We expected at least 90% Meru ethnicity. Somalis however are extremely capable merchants and Maua has a very valuable and tradeable commodity, miraa. So like flies to honey they flocked in their hundreds to the small yet extremely rich town.

By the time we got to Maua I had been driving for six hours and over 400km but when we finally met up with Eric he insisted on taking us to see the centre. So after checking in to our hotel we drove on to Laare, about 10km from Maua. The centre is temporarily hosted by the Laare Catholic parish. This stoked the fire of conviction that churches form a good backbone for such community projects; direct access to the community and structural resources.

Our trip to the parish was also our first chance to interact with locals of Meru - the priests. Kimeru language is not so much spoken as it is sung, with alternating pitch, tempo, and rhythm. It was fascinating to listen as the priests and Eric weaved kimeru in and out of the English conversation. Our hosts generously served us some hot tea and bananas (incredibly huge bananas) as they found out about our mission to Meru.

Eric also showed us the computers and equipment that had been donated by MIT for use in the centre. An impressive number of relatively new PCs, laptops, routers and switches all the way from Boston were stacked up in one corner of the priests' living room waiting for us to set them up the following day.

We finally left at around nine o'clock and slowly drove back to Maua. Slowly because it was a pitch black moonless night and the cold mountain air hitting the warmer tarmac caused instant rising mist on the road.

Used to Nairobi's fast pace we found ourselves still eager to explore the place at that late hour. However the few places we checked out were lifeless (it was a Tuesday) so we decided to go to the hotel and strategize on the following day. Before retiring though we purchased some of Meru's finest.

So while chewing on a few choice stems, we tried out the EDGE internet connectivity from the hotel room using my laptop and my cell phone as a modem. The connection worked quite well and I was even able to open my forex trading platform and put in a few trades. (Isn't technology wonderful - you can buy and sell off Wall Street while in a hotel in Meru right on the slopes of Mount Kenya!)

I finally gave in at 1:00 am as even the cathinone in the miraa could not erase six hours of driving. I left a 'cathinoned' Eric sending emails and on the phone with his colleagues in Boston late into the night.

Read more about my Meru trip on day two 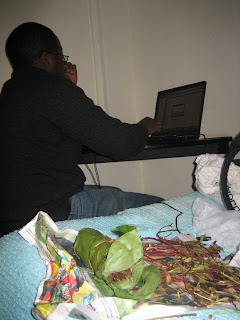 Interesting stuff I'm from that part of the country too. Sounds like you were up to some good stuff.

Glad you enjoyed your trip to Meru - thats my home town. And yes it can very very cold!

I thought EDGE was only available within major cities?

Thanks. It was fun in Meru, Day 2 follows shortly

Actually EDGE is available in very many places even away from major towns. In the three rural locations I've setup I've been able to get an EDGE connection even though all three are at least twenty kilometres from a major town.

Would believe it , Miraa has been compared to and at times said to be more dangerous than cocaine ? DC city government just elevated it to par meth & such.