March 08, 2012
Back in 1995 there were precious few internet connections in Kenya, and these few were courtesy of Dr. Shem Ochuodho's pioneering ISP. In Nakuru county there were even fewer, 3 to be exact, and one of those happened to be in our house.

We used it mainly for email, my dad getting to communicate with mom who was out of the country. We only dialed up every other day as the costs were dear. Being part of such a small community though had its advantages with one of those being that Dr. Ochuodho would send daily emails with a summary of the news of that day as it appeared in the press.

This was back in 95 when KBC was the only TV and radio station available in Nakuru and thus the only source of electronic information. Dr. Ochudho's "news"letters were therefore a gem and helped me appreciate just how effective internet communication was in relaying information. 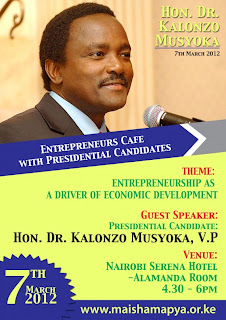 Fast forward to 2012 and we have a plethora of ways to instantly communicate. However when it comes to relaying diverse, up-to-date, and interesting content twitter takes the cake. I was an "early" entrant to twitter (at least as a KOT) circa march 2009 but it took me a whole year to really figure it out and make it useful to me. Number one thing I can tell someone who wants to get into twitter is to follow people who tweet things of interest to you and not to just blindly follow your friends (though the two are not mutually exclusive); as you might in Facebook.

So it was on Monday this week while following an interesting tweet that I came upon the hashtag #EntreCafe. A few clicks and I found out, @maishamapya were giving out invites to a forum where entrepreneurs could engage with the vice president Kalonzo Musyoka on matters affecting them. Wary of politician's ability to engage on policy matters but in need of a legislative solution to a problem I was facing, I quickly signed up and a couple of emails later I was on the invites list.

The event was being held at Serena and we were asked to be 30 minutes early at 4:30pm; which I dutifully was but it was nearly 7:00pm when the VP finally showed up. In the intervening period I got to interact with some KOT offline, including the ever ambitious @sokoanalyst who was a main organizer of the event, @akenyangirl who can befriend anyone under a minute, @geishafire who runs Networking in Heels and has some great ideas on incubation, and @UrbaneKenyan the economist who even the veep lauded for his vast knowledge of parastatal and government processes.

After waiting for nearly 3 hours though I was pretty anxious that the event kick off and almost missed a great opening speech by Dr. Masafa. Dr. Masafa is the executive chairman of West FM (the media station sponsoring the event) and kicked things off with a great story of how his father in the 50s would hire a human Public Address system every time he slaughtered a cow for sale. The human PA would climb on top the tallest eucalyptus tree and use his gift of gab to woo villagers to come buy the meat. He then analogised that West FM was offering a similar marketing platform leveraging 21st century technology, particularly with their digital news network which was being launched and also video streaming the event live. Much respect to the Daktari who has done a lot in the short time West FM has been operational.

The Veep then took the lectern and started by apologizing, claiming that as leader of government business he was held up overseeing an important vote in parliament. If that's so, then I let it slide however some of his minders had earlier used "traffic" as an excuse causing a KOT to comment that they'd want a president who is not late.

Mr. Kalonzo nevertheless gave what at first appeared to be a brilliant contemporaneous speech. It's only when late comer reporters appeared with DVRs and he started rehashing his speech to give sound bites and I realized that what I thought to be a great speech was really rehearsed talking points. Still I gave him 9/10 for delivery.

I made sure I pointed out the above when I asked my question which was whether the veep would commit to changing Section 34(1)(b) and Schedule II Paragraph x of the Advocates Remuneration Order (2009) which restrict registration of companies in Kenya to advocates and who can only charge a minimum of Sh. 50,000. He vaguely agreed that the law needed reform but instead of going the whole hog and standardizing the forms of registration to remove the need for specialized drafting knowledge, he substituted advocates with CPAs and "other professionals". I pointed out to him that Rwanda offered free online company registration and that should be our goal.

There were other great questions, comments and engagements with the veep. Some of the cherry picks were @geishafire's suggestion that the many free floors at Telposta could easily be used to incubate entrepreneurs on a rotational basis; and @samgichuru of @thenailab suggestion that we should stop our fixation on Konza, and instead work with what we have - like setting up 10 nailabs instead of waiting for 1 Konza city. There were also a surprisingly high number of entrepreneurs in agribusiness as well as civil society and members of the press.

The forum was in one word engaging, and the moderator Veronic from IEA did a fantastic job in keeping the flow and tying it all up together. Definitely looking forward to the next edition and a chance to bring more awareness and legislative action to the very noncompetitive company registration regime that is currently in Kenya.

Anonymous said…
Am interested in partnering up and starting a tech based company in Kenya. Come from India but one of my closest sister (Pauline) is from Kenya and am interested to see if this is going to work out.
shampya@yahoo.com
February 03, 2013 8:34 PM

March 22, 2017
Here is my valedictorian speech given during Riara University's first graduation   On January 7 th , 2013 on my 31 st birthday I received a strange gift from my sister. It was a deposit slip for part payment of fees for a one-year evening diploma course to a brand new University which I hadn’t heard of before. I had 1 week to make up my mind, or she could offer it to someone else. I decided to research a bit before making a decision, and I’d start first of the website. When the webpage loaded it took me all of 5 seconds to make a decision. Yes, I definitely wanted to attend Riara University. It all came down to 2 words, proudly proclaimed on the university’s logo Nurturing Innovators At my age, I’d been fortunate to have already attended two universities: Strathmore down the road where I learnt computing and University of Nairobi where I studied law. But never before had I felt such a strong emotional connection to a place of learning like I felt with Riara. And it was a
Post a Comment
Read more